We have come to the end of this term! This means that the time has come to asses what we have done to meet our learning outcomes!

Here is how I met them!

Email ThisBlogThis!Share to TwitterShare to FacebookShare to Pinterest
Labels: final part 1, How I met the Learning Outcomes for English 251, last post, posted by Sined

When I made my first plan, I became aware of the gaps in my literary knowledge. I was reminded that even though I had taken AP Language and AP Literature in high school, those were not substitutes for continued active reading and learning. I knew I had to do better, not only for this class, but because I care about English and enjoy being able to talk about it intelligently.

Email ThisBlogThis!Share to TwitterShare to FacebookShare to Pinterest
Labels: how I met the learning outcomes, posted by Lindsey

Reviewing My Progress During the Term

For my first post I made a personal learning plan which gave an outline of how I was going to accomplish the five learning outcomes of our Literature class:

When making my plan I identified where I was weak in my understanding and application of the learning outcomes. I decided that each week I would track my progress by logging my reading time in my posts and also by the content of those posts. After my midterm review I was told to make in improvements in the learning outcomes of Literary Terms, Writing Literary Arguments, and Creatively and Socially Engaging Literature. I also was told to not just use, but analyze new media which I have done in my more recent blog posts. I highlighted my new posts and improvements in green to show how far I have come in all five learning outcomes. I believe these posts represent the growth that I have had during this class:

I've tried to dictate the content of my posts this term around our class learning objectives. The new stuff is highlighted in blue. How'd I do?

Read more »
Posted by Jennifer Tate at 1:37 PM No comments:

Email ThisBlogThis!Share to TwitterShare to FacebookShare to Pinterest
Labels: how I met the learning outcomes, posted by Jennifer

My Final Draft and How It Came to Be

To really get to the backstory of my paper, we've got to look back about...two years. That's right. Two years ago I began to embark on my journey of utilizing the internet for purposes other than Facebooking. I created my Tumblr and started actively using it. It took a little while, but I started making "internet friends," following people who were doing Cool Creative Things that I cared about, and occasionally doing a few creative endeavors of my own. I gained followers who I could share things with and it was really fantastic to discover this whole creative world on the internet that I had never known existed.

This is the point in my life at which the internet became something more than merely a homework helper or a time waster. After joining Tumblr, the internet became a place that was intertwined with my life.
Around this time I also became a much more active YouTube viewer, particularly watching vloggers. Though their YouTube videos weren't necessarily creative content, most of the vloggers I watched created other things in their "real life" - like YouTuber and bestselling author John Green, for example. YouTube became a place where I could interact with people who I admired, and who were doing Cool Creative Things that I could consume.
Add in some Twitter action, and the internet was a place that was really important to me.

Email ThisBlogThis!Share to TwitterShare to FacebookShare to Pinterest
Labels: posted by Lindsey, story of my paper, thesis

Well ladies and gents, the time has come, the unveiling of my final draft! It was road with many turns and changes, which ultimately led to a finished product which I must say is far better than its predecessors.

It all began as I started musing about what topic had most captivated me during this term in my English class. I discovered that there were two themes which I was most interested in exploring: the literary worth of non-fiction and what we gain when we analyze romantic poetry in specific. Finding both subjects very interesting, I became torn as to which I would choose! My interest for the first one had arisen from rereading Elie Wiesel's memoir Night, and pondering about the literary elements that made it stand out.  The I became interested in the second as I embarked on my personal study of poetry, exploring different genres and analyzing different works.

I decided to inquire the help of my social media coupled with that of friends and roommates in order to chose between the two possible topics! First, however, I created a list of the different types of claims that I would make. I then carefully chose which I thought were best and circulated them. I tried not to do this too bluntly, though. For instance, when seeking for help in my personal blog I posed my claim as a thought that had been circling my mind and wanted to share to see if others felt the same way. When talking to my friends and roommates, I struck a casual conversation and snuck my claim in (if I would have told my friends it was for school, they most likely would have not been as engaged!)

When I finally decided on a topic that I would address for my paper (The analytical tool as observed in romantic literature), I moved on to developing it by first testing what I would specifically talk about. By using Dr. Burton's suggestions on how to develop a literary analysis, I began to move forward with my paper as I did some research on genre and literary period. I also performed a close reading that allowed me to identify literary elements that would later help me support my argument.

Having done this, I felt like I was on good ground to actually start my paper! I then went on to create an outline that greatly helped stay organized throughout the rest of the process of writing my paper. I proceeded to write a first incomplete draft to obtain feedback regarding the direction of my paper. I received great feedback from my peers, (specially Jennifer!) as well as my roommates who I gave physical drafts to.

I took their advice and fixed what they suggested, moving then quickly onto writing one of my final draft, which I again circulated amongst friends in addition to the peer review held in class (thanks again Jennifer!) 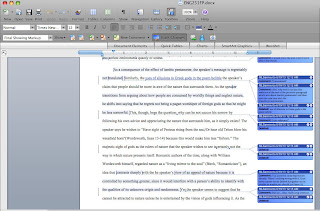 My friend's comments on my paper

Email ThisBlogThis!Share to TwitterShare to FacebookShare to Pinterest
Labels: final paper, posted by Sined, story of my paper

The Story of My Paper

I guess the idea the idea for my paper came from an Elder's Quorum discussion we had a few months ago on what it means to be a man. Later someone from our Elder's Quorum posted a video on the art of manliness on facebook:

The video talked about going back to the masculinity found in males of our grandparent's generation or becoming a retro-sexual. I found this very interesting and it was something I had thought about for awhile after our discussion. When thinking of ideas for my paper I noticed that made a lot of posts on Bond, my Grandpa, and Mad Men. I noticed that all of these post had a common theme. All of them were focused on a certain generation, particularly the period between the 50's and 60's. This brought me back to the video and discussion that left impressions on me a few months back. 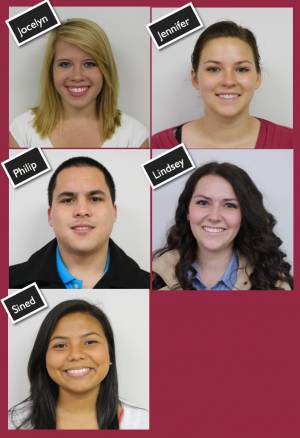